This Is an Experiment – Episode 46: Page 153 of Edith Pearlman’s Binocular Vision

Edith Pearlman isn’t just an award-winning author—she’s also local. I love Boston writers, so it made me really happy to include this page in TIAE.

A great reading of Edith Pearlman’s “The Coat.” 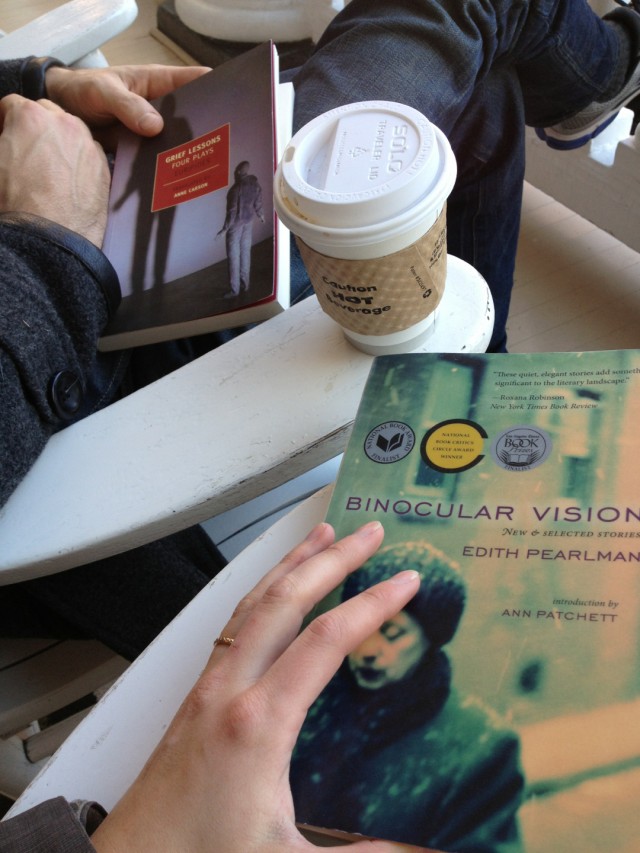 Lookout Books poet John Rybicki will be doing a reading and workshop at Haverford College next week.

Walking into a library or bookstore—or falling into the swirling vortex the kids call the “World Wide Web”—can be an overwhelming experience. Life is short, and there’s so much literature worth consuming. We all long for a weekend afternoon on the couch, our only companions a cup of coffee and a good book. But what book? You’ve got five sitting unread on your shelf, not to mention three stacked by the front door (library due date approaching), and a Readability queue full of the online essays and short stories you marked “read later.” If you own an eReader, you probably went crazy downloading all the public domain classics you never got around to in high school. Where to begin?

Allow me to simplify things for you by offering some recommendations from a few trusted sources. Herein you’ll discover brand new literature, the craziest stuff on Wikipedia, and everything in between. Mark down what’s of interest to you and disregard the rest. You’ll never run out of things to read, so you may as well just pick something and get started, no regrets.

1)  Roxane Gay’s Reading Roundup, Fall 2012: The Rumpus offers some great recommendations and reviews from the co-editor of PANK. She organizes her selections into categories such as “Coming of Age” and “Looking Ahead.”

2)  Treehouse: This new online literary magazine requires its contributors to submit Top Five recommendations lists which appear on the site the day after their own creative work is published. The links range in theme from Wikipedia articles to poetry collections to banned books. (The actual pieces posted in Treehouse are excellent, too.)

3)  One Way to Talk About Contemporary Fiction: my friend Chris maintains this Tumblr with a friend of his. Find regular links to new fiction and lit-related happenings, nearly all of which are available online.

4)  Radiolab: This isn’t a recommendation list per se, but the website for Jad Abumrad and Robert Krulwich’s fantastic science radio show is chock full of great listening and reading material. Subscribe to the podcast, check out the show archives, and find supplementary reading material for many episodes.

When you’re on the hunt for new reading material, where do you look first? Whose opinion do you trust the most? Let us know in the comments!

Noir is essentially a compendium of detective tropes written in 2nd person, strung together to give the impression of narrative. You, Philip M Noir, spend most of the book drunk, searching for a widow in a maze of murder, jazz and cigarette smoke. As goons continually beat you in the head, victims change into suspects, corpses turn up living, and dead end clues pile up with the bullet casings.

A powerful silence graced the room as Rybicki weaved through anecdotes of time spent with his wife and passages from his books. As he finished, most felt not a deafening sense of sorrow but rather a promised notion of his fortitude in overcoming a grave loss.

“He makes his poems out of true feeling — he lives his poetry,” said creative writing professor Robert Fanning, who introduced Rybicki to an audience of more than 100. “He’s doing things that are so far beyond what we can do in our best hour with our sharpest pen.”

You may have noticed that Lookout is celebrating Banned Books Week, which runs from September 30 – October 6.

Hopefully many readers across the U.S. have been spending this week feeling grateful for—and inspired by—the opportunity to read banned books and fight back against the egregious acts of censorship that have prevented many readers from accessing these titles.