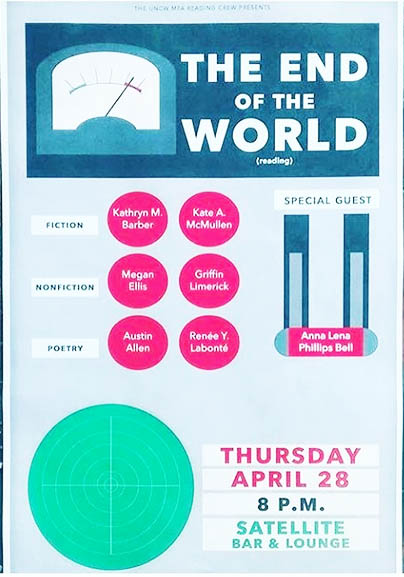 Ecotone and Lookout wish you and yours the happiest 2016!

It’s the most wonderful time of the year! The air is filled with best-of lists, Pushcart nominations, and NEA grants! And magic, of course: in the form of Christmas music, too many cookies, and implausible stories we tell our children. In honor of how fiction enriches our lives, this week’s roundup has a list of years-end honors received by Lookout authors and Ecotone contributors who tell us tall tales.

We’ll start with a heavy hitter: the New York Times list of 100 Notable Books features Lookout author Edith Pearlman, and Ecotone contributor Lauren Groff. And we love this list from NPR Books which features Groff again, of course, and contributors Claire Vaye Watson, Toni Tipton-Martin, and Jim Shepard among a slew of other really fantastic choices.

Huge thanks to the good folks at At Length for their Pushcart nomination of “Where Judges Walk,” part of Matthew Neill Null’s novel from Lookout, Honey from the Lion.

The National Endowment for the Arts has awarded their fall fellowships for creative writers, and we’re so happy for Ecotone contributor Vedran Husic.

Speaking of Santa Claus, Ecotone contributor Clare Beams has a post up on the Ploughshares blog on historical fiction. She says, “The past I want to read and write about is always the kind alive enough to frighten.” Which is why we love her writing so. And perhaps the holidays, too. Is the idea of a man coming down your chimney not more than a little bit frightening?

Thanks, as always, for reading. We’ll be back with roundup in the new year. In the meantime, here’s hoping your season is filled with the best-of everything! Including stories.