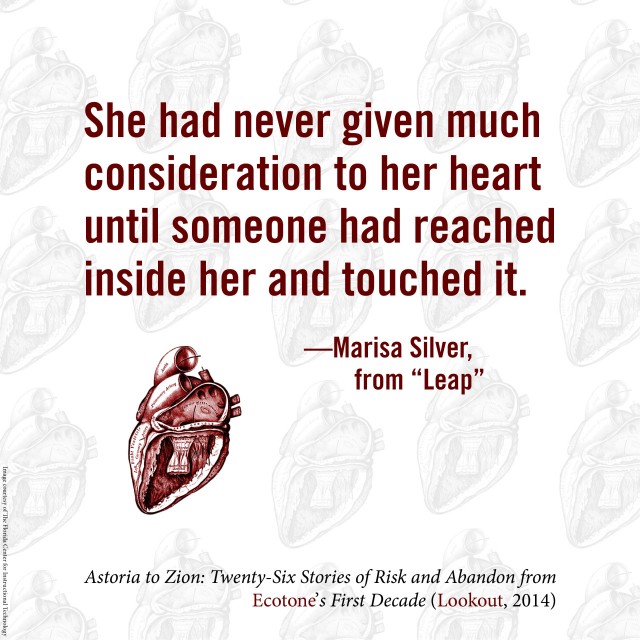 Define bad. Define okay. Define trouble. Define sad. It’s easy to offer dictionary definitions, but when it comes to personal interactions, things are not always so clear cut. As a writer and reader, I’m interested in what motivates people, how behaviors are formed, and just why we do what we do. Marisa Silver’s “Leap” is an intimate character examination that explores how an experience shapes and defines a woman’s life. We’re offered a non-judgmental, introspective view of the oil spill that is human emotion. We see how it shifts and changes, sinks and grows, affecting every aspect of self. Silver treats her characters with care and sympathy in such a way that we understand even the most questionable patterns of thought.

I was introduced to “Leap” when reading for Lookout’s upcoming anthology Astoria to Zion: Twenty-Six Stories of Risk and Abandon from Ecotone’s First Decade. Once I finished the story, I understood why it was included not only in this anthology, but in Ecotone’s fifth anniversary edition as well. The characters dwell in an emotional ecotone, where variant and even conflicting states overlap and exist in spite of one another.

The story opens with Sheila as a young girl, selling lemonade at a stand with her sister and two friends. They’re approached by a man holding a wrinkled bag. We immediately understand that his intentions are anything but genuine. While Sheila feels in her body that something is wrong, the event leaves her with a heightened sense of self-awareness. “Suddenly, she felt beautiful and much older than she had ten minutes earlier. She was certain of it … She would never tell her parents that for the first time she had been taken seriously.” From an early age, Sheila’s idea of desire is entangled with risk.

“The girls were manning a lemonade stand—a medium-size Dixie cup for fifty cents, or a cup with a Hydrox cookie for seventy-five. Sheila, her older sister Trudy, and Maggie and Jeannie, ten-year-old twins who lived down the street, sat on folding chairs behind the small card table the twins’ mother had loaned them. The backs of Sheila’s thighs burned from the heat trapped in the metal of the chair. She wore culottes, a combination of a miniskirt and shorts. Sometimes she thought of the outfit in the opposite way, as shorts mixed with a miniskirt. But today it was the first version because Maggie and Jeannie were both younger, and because, for once, Trudy was not pressing down on Sheila’s soul as she were a thumbtack.”

Excerpted from “Leap” from Astoria to Zion: Twenty-Six Stories of Risk
and Abandon from Ecotone’s First Decade. Copyright © 2014 by University of North Carolina Wilmington. Used by permission of Lookout Books. All rights reserved. No part of this excerpt may be reproduced or reprinted without permission in writing from the publisher.