This installment of On Location comes from Ecotone contributor Elliot Ackerman, whose story, “Charlie Balls,” appears in the Migration Issue. 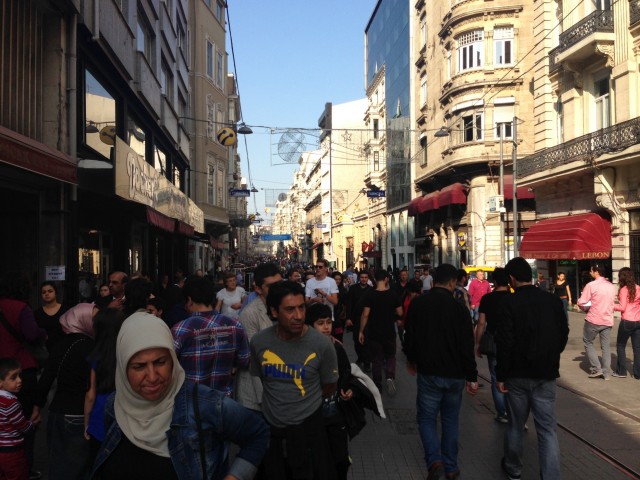 Where are you from?

I often feel like answering, “nowhere.” Because the “right” answer has always eluded me, and as an American living in Istanbul these past two years my answer has only become more muddled. That I am American is obvious to any inquiring Turk—the sharp ‘e’ in my pronunciation of merhaba (hello), that I often confuse günaydın (good morning) with iyi akşamlar (good evening), and that I never drink ayran, a tepid, salty yogurt drink—yet the asker always wants a specific answer, not just “America.” I usually respond “New York,” though I have never lived in New York, but the city is such a colossus, so vast and multicultural, that evoking its name usually kills the conversation because whoever has asked just nods, unable to produce a follow up question, as if I dropped a skyscraper of possibilities on their head. Sometimes I say Washington, D.C., which is a bit closer to the truth. I owned a house there for a few years before uprooting to my flat along the Bosphorus. However in the Muslim world calling the seat of the U.S. government your home can engender unwanted suspicions, so I lay off that answer. When I get bored of replying New York or Washington D.C., I often say Los Angeles. Which also is true. I was born there and left when I was nine years old. Los Angeles usually gets a predictable response. I am asked about movie stars, if I know any, if I’ve got some stories, which in fact I do having gone to a Montessori school that harvested an usually high number of famous and even infamous Hollywood figures. But the L.A. stories take a long time to rehash so I have to be in a certain mood to claim the Angel City. If I’m feeling provocative, I’ll say Texas. This is less true, but not without some grounding. My mother’s entire side of the family is from Dallas. I grew up spending holidays there. My grandfather, a former state senator and small business owner played an important role in turning Texas politics from majority-blue to majority-red after the Second World War, helping define the state brand of nouveau conservatism. (You’re welcome, America.) When he died I inherited his jewelry box: lone star cufflinks, tie clasps, some money clips, a formidable belt buckle with a stallion and colt on it that I wear with my jeans. So when I say “Texas” to an Istanbulite, lifting my shirt and jabbing my thumb at the belt buckle, I always get a sustained and respectful nod. I’ve found there’s a little Texan in most Turks. Or, more aptly, perhaps there’s a little Turk in most Texans.

When I was around seven years old I went to see Spaceballs, the Mel Brooks parody of Star Wars, at the iconic Egyptian Theater off Wilshire Boulevard in Los Angeles. In the climactic faceoff between Dark Helmet (think a nebbish Darth Vader played by Rick Moranis costumed in a little black tie with enormous helmet and glasses) and Lone Starr (Han Solo meets Indiana Jones meets Luke Skywaker played by Bill Pullman), Dark Helmet reveals the secret of his past, the one that connects him to Lone Starr. This is the “Luke, I am your father” moment of Brook’s satire:

Star Wars is an origins story, so is Spaceballs. Here’s the chronology of my origins: I was born in Los Angeles and lived there until I was nine, then moved to London and lived there until I was fifteen, then went to Washington D.C., then to college in Boston, then into the Marines where I was based out of North Carolina for six years but deployed around the world, then back to D.C. for a few years, then to Istan

bul. So what am I? A Californian? Londoner? Washingtonian? North Carolinian? Perhaps, like Dark Helmet says, I am absolutely nothing.

I think I like that best, to be from nowhere. It frees me to be wherever I am.

Elliot Ackerman is the author of the best-selling novel Green on Blue and the forthcoming Dark at the Crossing, a novel set along the Turkish-Syrian border. He lives in Istanbul.