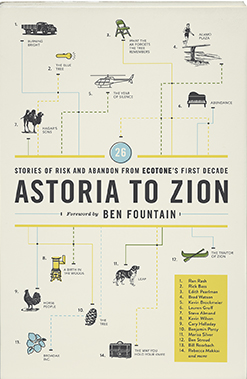 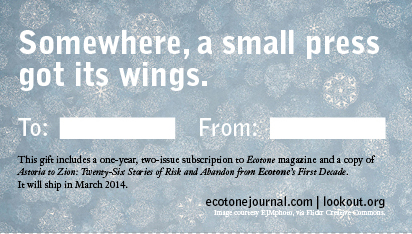 Still in search of last-minute holiday gifts for your bookish family members and friends? We’ve got you covered.

When you purchase a one-year, two-issue subscription to Ecotone, we’ll throw in a copy of our forthcoming best of Ecotone fiction anthology, Astoria to Zion: Twenty-Six Stories of Risk and Abandon from Ecotone’s First Decade. The total for this three-title package? Just $25!

The two-issue subscription—normally $16.95—will begin with issue 16, which is devoted to the theme of migration—work that engages a broad sense of motion, memory, journeys, and movement in thought. Among many others, it features Jim Shepard, Angela Carter, Molly Antopol, Cary Holladay, Hailey Leithauser, and Luis Alberto Urrea.

Both the migration issue and Astoria to Zion—$18.95 retail—will arrive in early 2014 in a single package, and the next issue of Ecotone will arrive in fall 2014. It’s the gift that keeps on giving!

Place your order today, and we’ll even email you a set of PDF-writable  gift cards you can send to the lucky recipient, just in time for the holidays.

Salman Rushdie named Ecotone one of a handful of journals on which “the health of the American short story depends.” And in his foreword to Astoria to Zion, Ben Fountain writes, “Ecotone defines itself as the magazine for reimagining place, a claim that deserves to be applauded as a rare instance of truth in contemporary advertising. In an age where place has never seemed more tenuous and abstract, it’s hard to conceive of a more relevant mission for a literary magazine.”

Place your order today, because this offer won’t last long!

Stumped on what to buy your most literary, well-read family members and friends for the holidays? When you purchase a one-year, two-issue subscription to Ecotone, we’ll throw in a copy of our forthcoming best of Ecotone fiction anthology, Astoria to Zion: Twenty-Six Stories of Risk and Abandon from Ecotone’s First Decade. The total for this literary package? Just $25!

The two-issue subscription—normally $16.95—will begin with issue 16, which is devoted to human and animal migration, as well as work that engages the theme in a broader sense of motion, memory, journeys, and movement in thought. Among many others, it features Jim Shepard, Angela Carter, Molly Antopol, Cary Holladay, Hailey Leithauser, and Luis Alberto Urrea.

Both the migration issue and Astoria to Zion—$18.95 retail—will arrive in early 2014 in a single package. It’s the gift that keeps on giving!

Place your order today, and we’ll even email you a printable gift card you can send to the lucky recipient, just in time for the holidays.