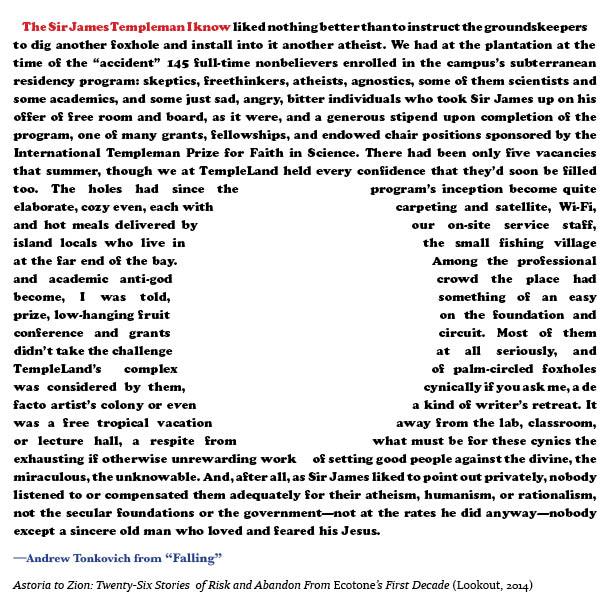 “The Sir James Templeman I know liked nothing better than to instruct the groundskeepers to dig another foxhole and install into it another atheist. We had at the plantation at the time of the ‘accident’ 145 full-time nonbelievers enrolled in the campus’s subterranean residency program: skeptics, freethinkers, atheists, agnostics, some of them scientists and some academics, and some just sad, angry, bitter individuals who took Sir James up on his offer of free room and board, as it were, and a generous stipend upon completion of the program, one of many grants, fellowships, and endowed chair positions sponsored by the International Templeman Prize for Faith in Science.”

Excerpted from “Falling” from Astoria to Zion: Twenty-Six Stories of Risk and Abandon from Ecotone’s First Decade. Copyright © 2014 by University of North Carolina Wilmington. Used by permission of Lookout Books. All rights reserved. No part of this excerpt may be reproduced or reprinted without permission in writing from the publisher.