In Seven Questions, we interview writers, editors, designers, and others in publishing. Today we talk to Jamie Poissant, whose essay “The Story of a Year” appears in Ecotone’s tenth anniversary issue. His debut short story collection, The Heaven of Animals, was published by Simon & Schuster in 2014 and is just fantastic. Jamie is also just an all-around great guy and model literary citizen. Seriously. Follow him on Facebook–he’s the best. 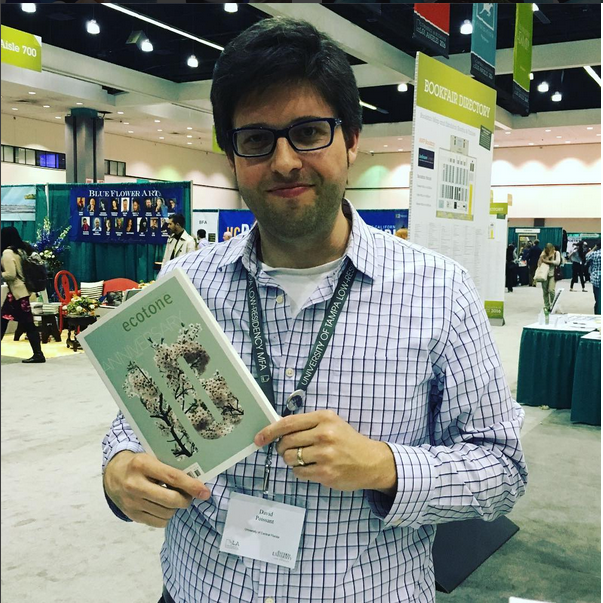 I read so many things all at once, it’s embarrassing. I just reread Molly Antopol’s The UnAmericans and James Salter’s Last Night, both of which I’m teaching this semester, along with John McNally’s book on writing, Vivid & Continuous. I’m reading several novels, including Magnus Mill’s The Maintenance of Headway and Andrei Codrescu’s The Poetry Lesson, and I keep dipping in and out of a few different story collections, including Shawn Vestal’s Godforsaken Idaho and Danielle Evans’s Before You Suffocate Your Own Fool Self. Next up in my pile are Lauren Groff’s Fates and Furies and Percival Everett’s Half an Inch of Water.

My favorite novel of all time is The Great Gatsby. I’ve read it a dozen times. And I understand, toward the end, that Tom and Gatsby have to switch cars for the plot to carry forward. But that moment always feels forced to me, contrived. I wish Fitzgerald had found a better way to handle the car swap. Even as a power play, it seems out of character for Tom to want to drive Gatsby’s car or for Gatsby to let Tom drive it. The only real explanation is that Myrtle has to mistake Gatsby’s car for Tom’s at the end. It’s a plot device that could have been handled more gracefully, in my opinion. Otherwise, the novel—again, in my opinion—is pretty much perfect.

My answer to that question changes every week! The best thing about literature right now is that there are so many beautiful debuts every month, and the range of voices is expanding and becoming more inclusive, which is exciting to watch. I have not read it yet, but I have my eye on Claire Vaye Watkins’ first novel, Gold Fame Citrus, which was just published last year. (Her first collection, Battleborn, blew me away.) I’m also looking forward to Shann Ray’s first novel, American Copper, which was published this past November.

Padgett Powell’s Aliens of Affection. The paperback has a picture of a frog copied nine times, so it makes for a really trippy cover.

Paris. Or Iceland. My wife and I spent a week in Paris this summer and, clichéd as it may be to say, we absolutely fell in love with the city. Alternatively, Iceland is a place I’ve never been, but I’m obsessed with the idea of going there someday. The pictures I’ve seen are stunning. The landscape is lush. The architecture is gorgeous. I imagine it would be an inspiring place to live and write.

How well do you have to know a place, if at all, to recreate it in writing?

Place is essential to my fiction, and all of my settings are presented exactly as I remember them. Once I visit a place, it never leaves me. Even after spending only an hour or two somewhere, I can usually call it up pretty quickly. My wife remains a little freaked out by how my memory works. For example, when we were in Paris, I really grew attached to this one painting at the Musee d’Orsay. A few weeks later, I couldn’t recall the name of the painting or the painter who painted it. But, I could remember the floor and the room where we saw the painting (out of several floors and many, many rooms). So, I went to the museum’s website, navigated the online floorplan, and there it was, the painting, right where I’d left it. I don’t know what this says about me. I wish my spatial memory translated to, like, being better at math or finances, but no such luck.

Morning or night? I hope you’re asking about writing. If so, morning.

Hardcover or paperback? Both! I love to collect hardbacks, but I also love what publishers are doing these days with paperback originals, especially the high quality ones with French flaps and deckled edges. I’m a sucker for book design.

Highlight or underline? Underline. With double underlines when something really speaks to me.

Novel or short story? Both. Novellas, too! Plus, I actually read a lot of poetry, though I seldom write it.

Sandals or slippers? Sandals, but only at the beach. Say what you will, but I’m definitely a shoes and socks kind of guy.