This installment of On Location comes from Ecotone contributor Callan Wink, whose story, “Off the Track,” appears in issue 14, our Abnormal issue.

Guide’s Day Off (The Yellowstone River in Paradise Valley, Montana) 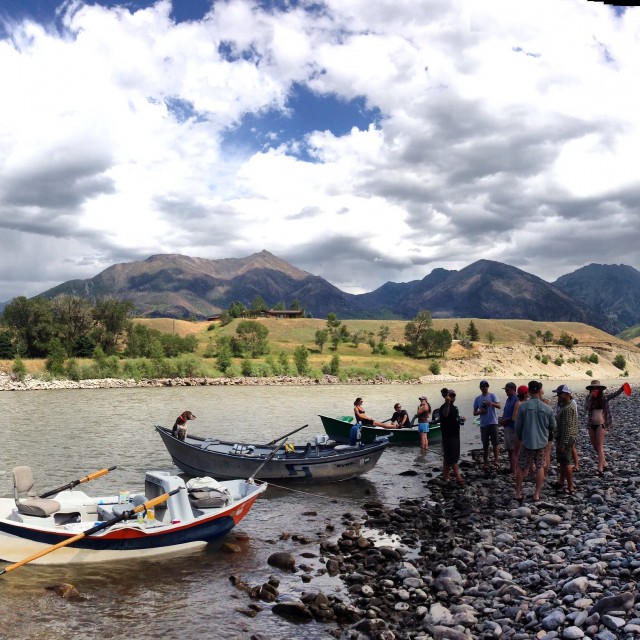 For the past ten years I’ve spent my summers as a fly fishing guide on the Yellowstone River. Every season is a blur. Montana summers are short, a relatively small window in which a fishing guide needs to make as much money as possible. Long hours on the water, sometimes over thirty days in row without a break. Up early to prep for the day. Coffee and more coffee. Meeting your clients. Figuring out what section to float, i.e. “the plan”—an arcane mix of informed luck and gut instincts honed by countless days on the water. The Yellowstone is a huge river system, and we guide on over one hundred winding miles of it. A dynamic, ever-shifting waterway that seems to change wildly from season to season, day to day. You pick your stretch and you go and sometimes you catch them and sometimes you don’t. You have lunch and point out eagles and talk about the old Native American buffalo jump across the river over there, and eventually you’re pulling into the take-out spot. You drop your clients at their hotel and then you go to the Murray Bar where most of the other guides straggle in to drink and bullshit. Sometimes the fishing is good and everyone is in high spirits—easy money, large tips. Sometimes, in late August, the doldrums, the fishing is slow and the sun is hot and everyone is short tempered and burnt.

Sometimes your boat knocked them dead on a day when everyone else struggled—you feel like you have it all figured out and gloat quietly to yourself. You’re the fish whisperer. The next day your luck changes, you make the wrong call, your plan is flawed, your clients manage only a few anemic whitefish, one of them snags you in the cheek with his fly. But, as these things go, eventually the end of the day comes and you load your boat on the trailer and drop the clients at their hotel and you go to the Murray Bar. You’re out of the sun and the air conditioning is delicious and, without speaking, the bartender ignores a queue of thirsty tourists to present you with your customary summer drink: a fishbowl of ice-cold vodka with fresh squeezed lemon and lime. Soon enough the other guides are there and the bullshit commences. On and on. A summer’s worth of it. Fish and sun and cash and Texas oilmen and daily immersion in the most captivating river you’ve ever seen.

Occasionally you get a day off. You’re going to do laundry, pay your bills, fix the growing number of things on your truck and boat that have become broken through hard use. You’re going to sleep in.

Of course, that’s not what you do. You’re up early by habit. Coffee and more coffee. You get on the phone and rally everyone you can think of who might have the day off as well. You make a plan. It comes together slowly, people drop out, people join up, but eventually everyone converges on the river. There are boats and dogs and bikinis and radios and Frisbees and coolers of beer. Someone has a battery-powered blender and there are margaritas. There are no fishing rods, though. That’s the general rule. All gear and paraphernalia pertaining to the hooking of trout are left at home. Anyone uncouth enough to buck the trend and try to fish will get ridiculed, blasted with water cannons, harassed by stick-chasing dogs.

A fishing guide’s day off. Tomorrow you’ll be back out there, hustling for trout and tips. Today though, you’re swimming, you’ve got a margarita, if you’re lucky, your girlfriend is rowing your boat.

There’s an eagle and when it flies over everyone points. You’ve seen it a thousand times and it’s still goddamn majestic.

Callan Wink was born in Michigan in 1984 and now works as a fishing guide on the Yellowstone River in Montana. His work has been published in the New Yorker, Granta, and The Best American Short Stories. His first book, Dog Run Moon, was released yesterday.