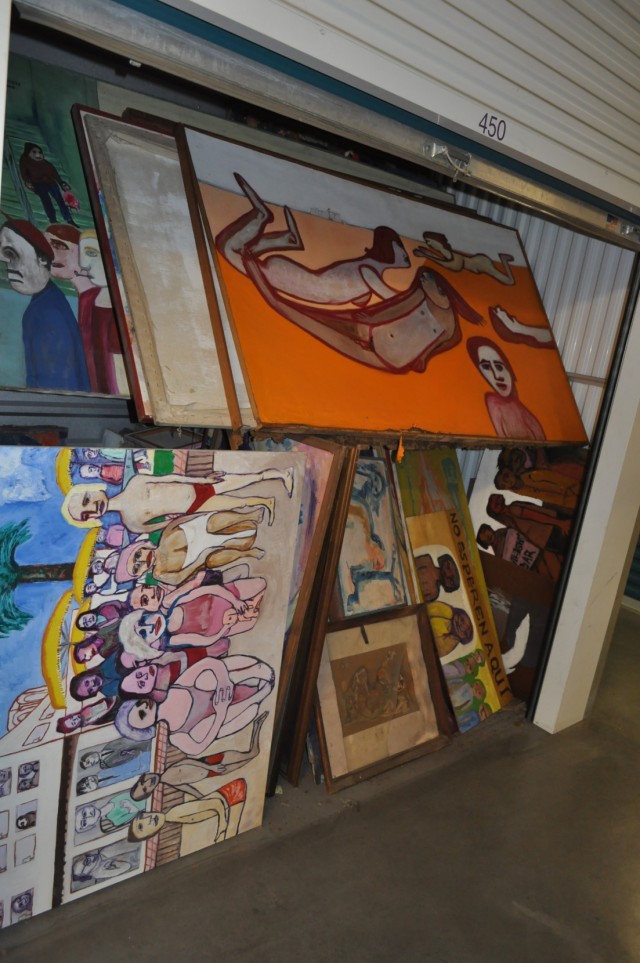 In the 70s he co-founded the anti-nuke outfit Orange County Alliance for Survival, wore a seashell necklace and felt hat. He led students on revisionist history tours of Disneyland, critiquing the place with a Jungian grimace at its perversion of fairy tales, a Marxist reading, an ecological anti-corporate attack. He was a work in progress, now mostly forgotten, no heirs. His widow, heartbroken, left it in the garage, behind the washing machine, to the silverfish and mold.

Welcome, then, to the Peter Carr Reliquary & Storage of Self Museum, a ten-by-ten-foot gallery in a dreary complex at the base of the Santa Ana Mountains overlooking valley, sea, chaparral, the monstrous toll road, and a nightmare housing development where threatened species are further threatened. Next door, the famous worship center of the prosperity gospel.

But, wait, all of that’s also inside, painted three decades ago. Imagine, the wild places, the corporate puppet-men and lying generals, trees, sun and, under it, a few good, angry humans protesting to save what’s left. And, look, there’s Peter himself (his favorite subject), alive, standing in front of the nearby nuclear power plant, recently shut down after years of protest. It’s an unlikely if perfect, hopeful ecotone of refuge, between pavement and scrub, death and life, disappearance and immortality. For now. I mean to revive my teacher and mentor, bring his work back out, into the vivid world he once apprehended, left too soon but never let go.