We’re finishing up the first full week of school at the University of North Carolina Wilmington, the home of Lookout and Ecotone, and are gearing up for a semester of literary action! We’re just a little over a week away from the release of Lookout’s debut novel, and we’ve got news and events aplenty:

Honey from the Lion makes the Literary Hub’s Great Booksellers Fall Review along with books by Jonathan Franzen, Ron Rash, Joy Williams, Lauren Groff, Claire Vaye Watkins, and Marilynne Robinson! Thanks to Mary Laura Philpott of Parnassus Books for the pick. She says, “Lookout Books publishes just one or two books a year, so it’s always interesting to see what they choose to put their faith in next. Matthew Neill Null’s debut novel Honey from the Lion demands your attention from the first page and keeps it until the last, with beautiful prose conjuring an atmosphere that’s rugged and desperate. I could see this being turned into a dark HBO miniseries.” 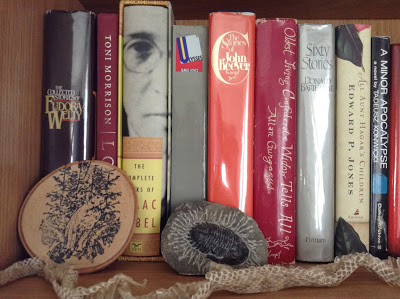 A proper library has more than just books! Find out what Matthew Neill Null deposits on his bookshelves, what book he’d rescue from a burning building, and a few forgotten books he thinks deserve a revival over at The Quivering Pen’s My Library series.
Want a free copy of Honey from the Lion? The Goodreads Giveaway ends this Sunday, Aug. 30. Head on over and get in the running!

Matt, who lives in Provincetown, will celebrate Honey from the Lion‘s launch on Sunday, Sept. 6 at Tim’s Used Books. And he will join Leopoldine Core, Doreen St. Félix, Alice Kim, and Anna North for Alienation Produces Eccentrics or Revolutionaries, hosted by Jenny Zhang, at Housing Works Bookstore Café, 7 p.m., Friday, September 4. Check out all of the tour events and happenings.

In Ecotone news, our anniversary issue received a fantastic review from NewPages: “Everything Ecotone does embodies the spirit of being a member of the literary community, and it is evident not just in their ‘product’, but in their other endeavors, including teaming up with the Common to provide two spectacular journals to readers.” We’re so grateful for the recognition. Our deal with the Common is still going strong, too.
And huge congratulations to contributor Molly Antopol, who was named a Radcliffe Fellow for 2015-2016. She’s one of 50 promising leaders in arts, humanities, sciences and social sciences.
That’s it for our busy first week. Check back next Friday for the latest roundup of news from our neck of the woods. We hope you’re headed into the weekend full of your own happy happenings. Let us know about them in the comments!