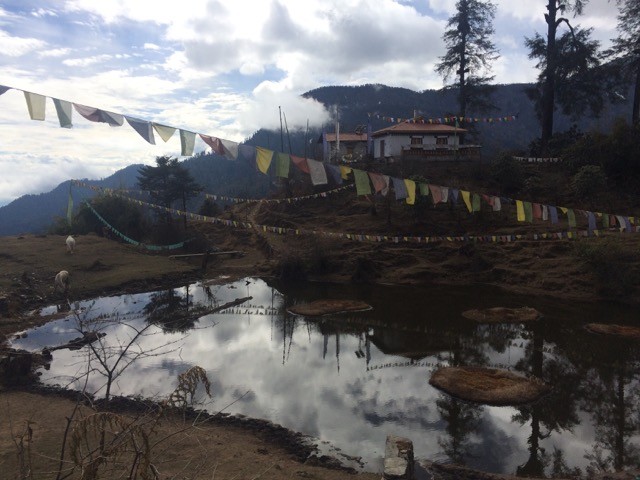 Tshoka: we stayed our first and third nights

Last January my daughter and I traveled to Sikkim, a restricted state in northern India nestled between Bhutan and Nepal. After spending a few days at a home for Tibetan refugees and other at-risk girls, we took a four-day trek in the Himalayas, up to fifteen thousand feet. It was a cushy trek, as treks go: Nepali cooks came with us, and dzos (half-yak half-cow) carried the bulk of our gear. Still, even with just our daypacks to carry, the hike was challenging, especially as we began to experience the effects of elevation. On the second day the climb became sharply vertical. We moved at a painfully slow pace, using the mountaineering “rest step,” in which you lock out your downhill leg to put the weight on the skeleton versus the muscles.

At night we slept in rustic huts. We were days out of reach of any communication. Other than our occasional conversation, the dzo bells as they neared and then passed us, and the wind, I mostly listened to myself breathe. On the trail, away from “civilization,” halfway around the planet, the smallest comforts became huge. My tiny tube of rose-scented moisturizer; the one pack of pre-moistened wipes I’d brought along; my down jacket. Over and over I found myself silently blessing Patagonia, the attention to technical design elements which mean little in the urban, southern U.S. but mean everything on the trail in temperatures that fluctuate from twenty-three degrees Celsius during the day to below zero at night—like cinch cords inside the pockets, so you don’t have to remove your hands to tighten the waistband. I developed an almost passionate attachment to my Nalgene water bottle. The cooks boiled water over an open fire at night so we could fill our bottles before bed. I’d slide my piping hot Nalgene into a sock and stuff it into my sleeping bag for warmth. By morning the water would be cold again, ready for an electrolyte tablet and rationed sipping.

The summit at Dzongri

But the thing that could (and did) bring me to tears was—after hours of trekking—the sight of prayer flags along the trail. The prayer flags meant we were approaching a place of rest: a summit, plateau, holy lake, or temple. Every time I saw the bright flash of red and blue, green and yellow in the trees or rocks ahead, I felt connected, again, to the world-at-large. Others have been here before you; others will follow. At the summit in Dzongri there were flags everywhere—wrapped around stupa-shaped rocks and strung between bushes. Flags upon flags upon remnants of flags. The idea is the circularity of existence, life replacing death replacing life. The greatest human accomplishments—the highest peaks we’re capable of reaching—even this is fragile, will fade and blow off. There was something about being at that elevation, above the welter and noise below, that reminded me of the space out of which writing comes. This is where, in a spiritual sense, I need to exist as a writer, I thought. Away from “the industry,” the constant chatter, the noise of readings and conferences. Of course those things have a place. But it’s not the place the work comes from. The work requires silence, rest, a kind of holiness, and—so important—non-attachment. You can’t write in total freedom until you’re okay with the fact that you might not keep a single word. The possibility that none of it may make it into print. 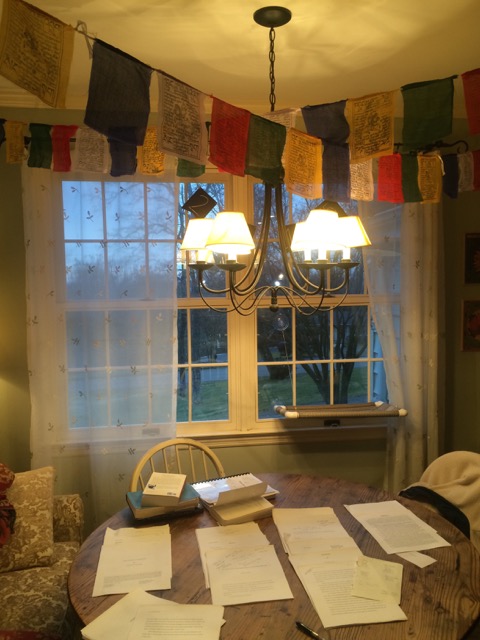 After the trek, at the Tibetan Refugee Center in Darjeeling, I bought an embarrassing number of prayer flags to take home as gifts. I’d planned to hang the ones I kept outside, as one is supposed to: let them deteriorate in the elements, kindness and compassion spreading out into the world. But when I got home I tied together several lengths and strung them above the kitchen table where I work. I like to equate showing up to the page each day—whether the pages are ones I write or edit—with those moments of arrival in the Himalayas. I like the idea of work being holy, connected to the past, a form of active rest. I like to show up each day remembering the silence at the summit. In some ways, I think my work is a way to practice staying there.

Jamie Quatro is the author of the story collection I Want To Show You More, a 2013 New York Times Notable Book and finalist for the Los Angeles Times Art Seidenbaum Award for First Fiction. Another story collection and a novel are forthcoming from Grove. A contributing editor at Oxford American, she lives with her family in Lookout Mountain, Georgia.